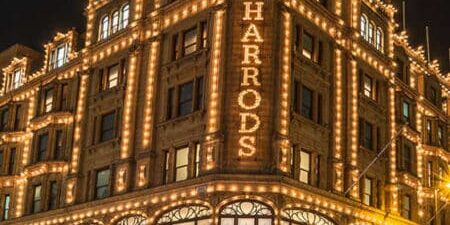 Department store jobs in London are always in demand, as a salesperson but not only. Remember that some department stores are also looking for other staff for their head offices. Among the shopping centers I list here are the most famous in London and consequently in the world.

If you are interested in working in London department stores, you must have a good command of English. In addition, knowledge of other foreign languages is mandatory or highly appreciated.

Harrods is the most famous luxury department store in the world. It is located in the exclusive Knightsbridge area of London. It was founded in 1834 and is now owned by the State of Qatar. The store occupies an area of 20 000 m2.

The Harrods Group employs about 5,000 people and serves more than 14 million customers in about 178 countries around the world. The assortment includes clothing, electronics, jewelry, sporting goods, wedding dresses, pets, toys, food and beverages, cosmetics, stationery, housewares, appliances, furniture and much more. Not surprisingly, Harrods’ motto is “Omnia Omnibus Ubique”: “Everything for everyone, everywhere.” Many of its departments, including the Christmas department and the food department, are very famous.

The Harrods Group is always looking to recruit staff for various positions in any of its divisions:

It should be pointed out that Harrods is considered one of the best workplaces in England, not for nothing it has received many awards attesting to its excellent working conditions. If you are interested in working at Harrods and you believe that your professionalism can be taken into account by the company, you can check all vacancies on the company website

Fortnum & Mason, often abbreviated as “Fortnum’s,” is a department store founded in 1707. It has three stores in London: Piccadilly, St. Pancras Station and Heathrow Airport. In addition, there are various retailers around the world.

Originally, it was a grocery-only store that earned its reputation by supplying high-quality food. Now it has diversified its offering with many other products, although its core business remains high quality food. It is a supplier to the royal family, among others. If you are interested in department store jobs at Fortnum & Mason, you can see all the open positions on the company’s website

Debenhams is a large British company founded in London in the 18th century. Today it has 178 stores in the United Kingdom, Ireland and Denmark. It sells a wide range of clothing, household items and furniture.

The company has stores in the United Kingdom, Ireland and Denmark, as well as others in various countries. If you are interested in working for Debenhams, you can see all the vacancies on the company’s website

John Lewis is a department store chain that operates throughout the United Kingdom. Some retailers also exist in the Republic of Ireland and Australia. The first John Lewis store opened on Oxford Street in London in 1864.

Today, there are 50 stores in the United Kingdom. If you are interested in department store jobs at John Lewis, you can see all the vacancies on the chain’s website

Selfridges & Co. is a department store chain in the United Kingdom. It was founded in 1908 by Harry Gordon Selfridge. The main store is located on Oxford Street in London and is the second largest in the country after Harrods. It was opened on March 15, 1909. There are other Selfridges stores in the Trafford Center, Manchester and Birmingham.

If you are interested in jobs at Selfridges department store, you can see all the vacancies on the company’s website

Harvey Nichols, founded in 1831, is a British luxury department store chain with its flagship store in Knightsbridge, London. It sells fashion collections for men and women, fashion accessories, beauty products, wine and food.

If you are interested in working at Harvey Nichols, you can view all job openings on the company’s website

The London Designer Outlet is a semi-open shopping center in Wembley Park in northwest London. There are about 100 stores.

If you are interested in department store jobs at the London Designer Outlet, you can view all open positions on the company’s website

Camden Market consists of a series of pavilions next to Camden Town near Camden Lock, often called “Camden Market” or “Camden Lock.” There are more than a thousand stores here.

It is the fourth most popular tourist attraction in London and is visited by around 250,000 people each week. There is no web-based recruitment system, you have to go there with your CV.

Oxford Street is the shopping street of London. Two kilometers from Marble Arch to Tottenham Court Road full of historic stores, bars, clubs and warehouses. All you need are: comfortable shoes and CV.

Sloane Street in London is a bit like Via Montenapoleone in Milan: here you can find the most important brands, and if you want to work in this sector, you can not avoid considering it.

If you want to have all the information about how to work in United Kingdom, I recommend you to read the article: How to work in the UK after Brexit