Living and working in STRASBOURG 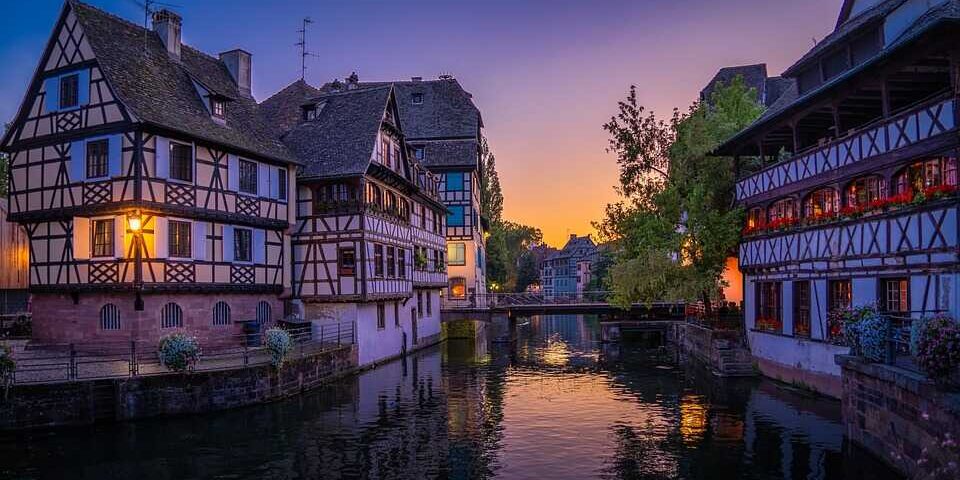 It is located in the eastern part of the country, on the border with Germany. The city has always been contested between France and Germany, belonging to either one nation or the other. This dual soul of the city is reflected in its culture, architecture and tradition.

Even the traffic signs in Strasbourg are bilingual. French and Alsatian (the local Germanic dialect). Alsatian was the main language of the region until it became French again in 1919 with the Treaty of Versailles after the end of World War I (if one disregards the Nazi interruption between 1940 and 1945, when it fell back under German rule).

It is one of the ten largest cities in France and has about 300,000 inhabitants. It is a beautiful medieval city surrounded by canals and has characteristic alleys. A few years ago it was declared a World Heritage Site by UNESCO. The surrounding area is also very green and beautiful.

Strasbourg’s climate is described as semi-continental, with hot, sunny summers and cold, gray winters when the temperature can easily drop below freezing, and with frequent snowfalls. The city is located in the Reno Valley, a natural basin that does not favor air exchange. This means that air pollution in the city is – or rather, was – very high. Today, the situation has improved significantly due to the abandonment of the metallurgical industry and measures to curb traffic.

The cost of living is lower than in Paris, but higher than the average in other French cities,.So living in Strasbourg is not cheap. The city is quite expensive: accommodation, services and transportation are expensive, but when it comes to transportation, you can save money by riding a bike, as many Strasbourg residents do, taking advantage of the large number of bike lanes and the fact that the city is completely flat. Because of the many bicycles, you feel like you are in Amsterdam.

Strasbourg is not a very large city, but it is very lively. It is both a popular tourist destination and a university city, so it will be easy to meet people from all over the world. Strasbourg is a French city in every sense of the word, so French is the official and main language, but it is not uncommon to meet people who also speak German or rather Alsatian (a German dialect). Many people in Strasbourg also speak English well, as many international and European institutions are located in the city and everyone who works in these organizations is fluent in English.

In terms of employment, in addition to the many jobs created by the European institutions in the city, the industrial sector is particularly important, especially the food, engineering, pharmaceutical, health technology and research sectors. Another important source of employment is the city’s port, which is the second largest inland port in France after Paris.

Alsace is the second most important industrial region in France, with a strong vocation in agriculture and automobiles. Strasbourg is also one of the most important financial centers in France. Those who want to know more about working in Strasbourg and France can read the article: The Guide to Work in France

Living and working in Strasbourg, conclusion

Finally, Strasbourg is a small city that has been under German and French rule several times. This peculiarity makes Strasbourg so special that the people of Strasbourg first called themselves Alsatians and then French. The city hosts numerous international institutions and is considered the legislative and democratic capital of the European Union.

In short, the city offers an excellent quality of life and this mix of French and German culture makes Strasbourg a great place to live and work.